“A typical lomi lomi session begins with a prayer and may involve meditation and focused breathing exercises.”

Lomi lomi (also known as “lomilomi”) is a type of massage long practiced in Hawaii. Rooted in huna (a Hawaiian philosophy centered on achieving harmony in mind, body, and spirit), lomi lomi aims to promote relaxation, improve circulation, address muscle pain and other physical ailments, and provide spiritual and emotional benefits, including the relief of fear, anxiety, and other negative emotions.
One of the goals of lomi lomi massage is to clear blockages in the body’s natural flow of energy through the body. As in traditional Chinese medicine, energy blockages are thought to contribute to problems in physical, emotional, and mental health.
What Is a Lomi Lomi Massage Like? 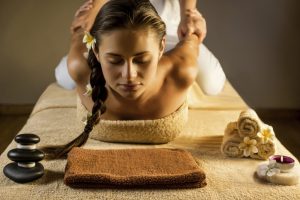 A typical lomi lomi session begins with a prayer and may involve meditation and focused breathing exercises.
Although practitioners use a variety of techniques and tailor each treatment to the needs of the client, lomi lomi typically involves rhythmic, flowing massage strokes which are meant to clear blockages in the circulation of energy through the body. The therapist typically uses his or her forearms to make long massage strokes.
Other lomi lomi massage strokes involve a circular or chopping motion, gentle pounding, percussive cupping, and/or fingertip tapping.

Fibromyalgia. A report published in PLoS One, for instance, reviewed previously published studies and found that massage therapy for five weeks or longer reduced pain, anxiety, and depression in participants with fibromyalgia.